Auction - Time of the Season by the Zombies

This Artist Proof of chart-topping single Time of the Season by the Zombies numbered AP1/7 is being auctioned to raise funds for the St Albans Museums and Galleries Trust (reg no 1051868) we will be linking to the auction here when it goes live so check back soon!

The proof was very kindly signed by the four original members of the band: Rod Argent, Colin Blunstone, Chris White and Hugh Grundy at a book signing in St.Albans. The print has been kindly donated by artist Morgan Howell who was also born and bred in St.Albans. The original painting which was also signed by the band is currently on display as part of the SXSW Festival 2019 in Austin Texas.

About Time of the Season

Time of the Season by The Zombies, featured on their 1968 album Odessey and Oracle. It was written by keyboard player Rod Argent and recorded at Abbey Road Studios in August 1967. After many unsuccessful releases from the album Time of the Season finally made its breakthrough in early 1969, over a year after the band split up. It reached number 3 on the Billboard Hot 100 in March, and reached number 1 in Canada. It did not chart in the band's native Britain, despite being rereleased twice.

The song's characteristics include the voice of lead singer Colin Blunstone, the bass riff, and Rod Argent's fast-paced psychedelic improvisation. 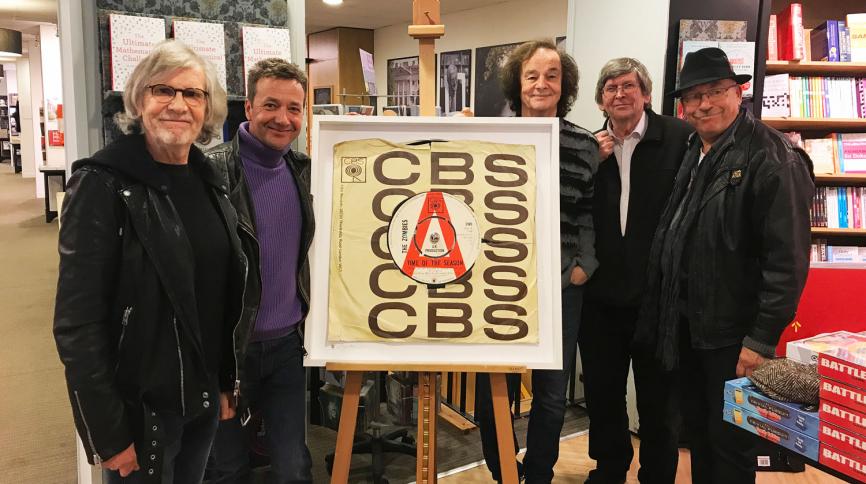 Known for his giant, hand-painted 3-D facsimiles of classic paper sleeve 45s Morgan creates a one-off unique supersized painting of each single. The natural wear incurred by the treasured disc is duly rendered in paint, making for a desirable artwork and consciousness portal for vinyl junkie music heads everywhere. Howell's attention to detail is fastidious, down to the authentically distressed and creased canvas that doubles as up-scaled paper sleeves and the tiny imperfections round the edges of the labels of the 27” vinyl records. He additionally offers prints and also takes commissions as long as the song hasn’t already been painted.

Examples of his work are a permanent feature of the Radio 2 Green Room alongside Elton John’s piano, and when the BBC interviewed The Rolling Stones in London’s Dorchester Hotel in the run up to their concerts at the 02 in November 2012, three of his supersize Rolling Stones singles formed the backdrop.

Howell’s passion has always been his art. In 2005, he was made a Fellow of the Royal Society of Art and in 2018 Morgan’s painting of The Beatles’ Capitol Records release of Yesterday was exhibited at the Royal Academy.