A union of past and present conflict and hope.

It’s a warm, peaceful yet busy summer day in Mosul, Iraq. Rays of sunshine reflect off on the River Tigris as it is overlooked by the tomb of Yahya Abu Al-Qasim. Ships from around the world are docked in the port. This is one of the watercolour paintings Edgar Wigram painted whilst on his visit to Assyria (modern day Iraq, Turkey, Syria, and Iran), a piece that caught my eyes instantly at the St Albans Museum + Gallery. 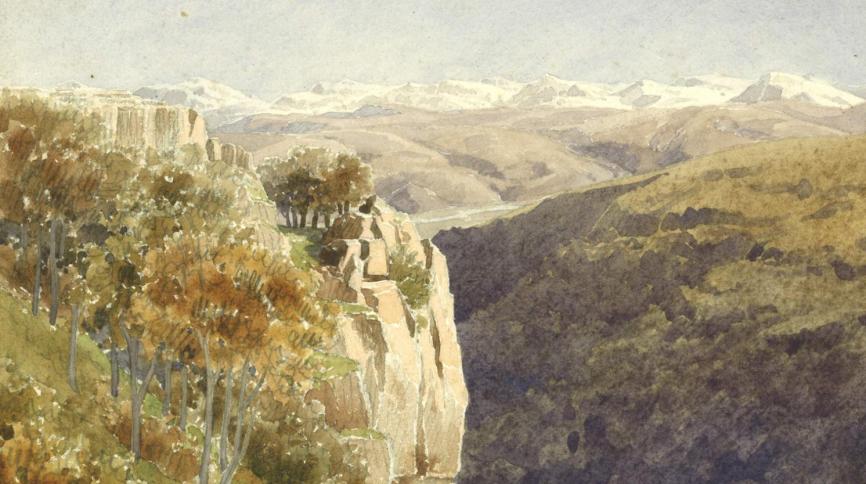 Assyria was a great empire that started out in what is now called Iraq; then spread across other Middle Eastern countries, including what is now Turkey, Syria, and Iran. The empire was strongest under its ruler Ashurbanipal, or as he referred to himself “King of the world, King of Assyria”. The late king ruled from 668 BC to 627 BC, and was known for his brutality with prisoners, his harsh punishment, and… wait for it… fighting and killing lions. But most importantly, he was known for his commitment to learning and reading and was commonly depicted carrying a stylus (pen).

The British Museum hosted an exhibition that has just closed titled “I am Ashurbanipal”, that saw great reviews. The exhibition explored the “king of the universe” who lived in Nineveh (now in Northern Iraq), where he built extraordinary castles and exotic gardens. Walking through the palace, visitors would notice the reliefs of (you guessed it), lion hunting.

Amidst all the brutality, it’s clear that he was a man of education, reading, and promoted learning, making the Assyrian empire a fusion of beauty, education, learning, and fearlessness. The paintings by Edgar Wigram enables us to see Assyria, across its four countries over a century ago and compare the past with the present. The watercolours that were created when the artist visited Iraq in mid nineteenth century, show what would been seen as a slightly more “modern” version of Mosul, compared to what it would have looked like during Ashurbanipal’s time.

Had the mayor of St Albans visited the city back then, he would have be able to capture the beauty of the architecture of the palaces and its hanging gardens, as well as the sculptured, winged bulls, known as Lamassu, that decorated the superb entrance gate to the city.

When you first walk into the gallery, you get an overview of Wigram, his astonishing work in St Albans city and his travels across Europe, North Africa, Assyria, and other countries in the Middle East too. We also get to see the tours and maps Edgar Wigram and his brother William used on their travel. It starts with paintings of Hertfordshire, visits to Europe as well as the Middle East. Paintings from the Middle East focused on Mosul, Kirkuk, and Nineveh in Iraq, as well as Aleppo in Syria, and Beirut in Lebanon. The exhibition also features paintings of Jerusalem, Petra and Amman in Jordan, and Turkey, in addition to different areas in Kurdistan.

The painting of Jerusalem show the Dome of the Rock on a peaceful day where a Muslim man is seen praying in the garden in front of the mosque. People walk around a place that is home to all of them, no matter what their religion is. It looks peaceful.

As an Arab, Iraqi girl, this exhibition created a mix of emotions for me. Looking at the masterpieces by Wigram instantly reminded of the happier image I had about home. Home where all religions lived at peace, where we learned of a king who was so protective of its country and people, that he couldn’t stand anyone who thought of destroying it. Home before four countries from the Arab world were demolished.  Where a civilisation that helped to create the world as we know it now was born, where libraries were first invented, science and maths were first discovered. It reminded me of the little six year old me running alongside the River Tigris with her friends and feeling that her country is the safest place on earth. I couldn’t help but think about how this historic country ended up where it is now.

If there is one thing I got from the Wigram’s Wanderings exhibition is hope. Hope for a better, safer, happier tomorrow.

Wigram's Wanderings exhibition is currently displayed at the St Albans Museum + Gallery from the 16th of February-19th of May.