from the V&A Museum of Childhood

Originally displayed at the V&A’s Museum of Childhood, this exhibition celebrates the joy, excitement and occasional frustration of playing board games.

St Albans Museum & Gallery showcased some of the most iconic, enthralling and visually striking games from the V&A’s outstanding national collection of board games. Alongside current family favourites such as Cluedo and Trivial Pursuit, and traditional games like chess, historical board games were displayed including The Game of the Goose and other beautifully designed games from the 18th and 19th centuries. 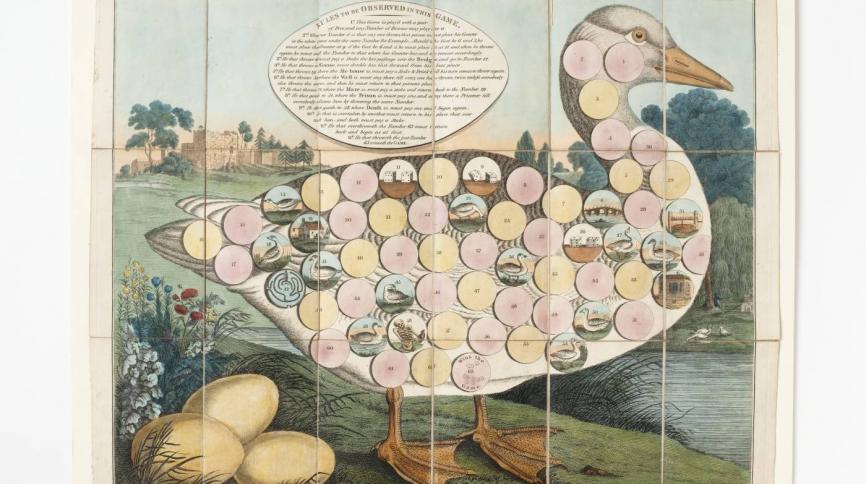 Board games are played by everyone, young and old. They have a universal appeal that transcends cultural and language barriers. They can both teach and entertain us. The playing of board games is embedded into our culture, not just the games themselves but the act of playing, the interaction with family and friends, the lessons to be learned and the fun to be had.

Game Plan: Board Games Rediscovered featured games from around the world, and explored the important role of design. Throughout the exhibition, selected games of special interest were highlighted with a more detailed look at their history and influence.

More than 100 objects were displayed as part of the exhibition, with further St Albans specific games artefacts from the museum collection being displayed in other galleries. Such as a 12th century chess piece which was discovered on Chequer Street, and the special edition Monopoly which features St Albans as the ‘Mayfair’ spot.

To celebrate the exhibition opening, we ran a host of family focussed events and activities. These included a museum trail, our Play the Game family fun day, large scale Games in the Galleries activities and games inspired craft sessions.