St Albans Performs its Past

This exhibition told the story of the St Albans pageants with objects, voices, pictures and film. It showed how the pageants were organised, and what they did with local and national history – and considered what they meant to the people of St Albans, then and now.

We’re so thrilled to have worked with St Albans Museums on this exhibition. St Albans has such a rich history of pageants and we’re delighted to tell this lesser-known story about the city.

The pageant was staged in Verulamium Park, with a temporary grandstand like the one used at Sherborne. As most were held outdoors, their success often depended on good weather. St Albans was lucky in this respect!

The event was aimed at both locals and visitors. Special excursion trains were laid on for people coming to watch. There was newspaper coverage locally, nationally and even abroad – the American press took notice of St Albans, and some American tourists came to watch.

Spectators could buy mementos, some of which are on display in this exhibition. Postcards were especially popular as they were affordable to most pockets. There was
also a souvenir programme, a ‘book of words’ containing the full script, mugs, vases, napkins, commemorative medals, and more. 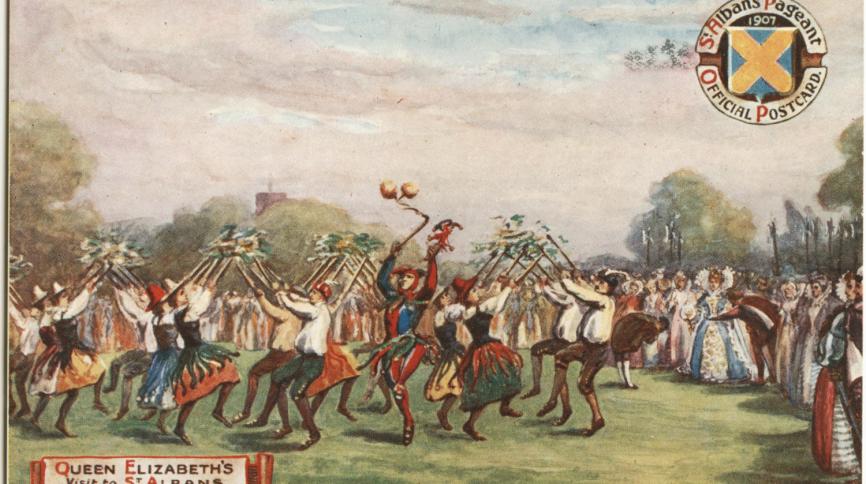 The St Albans Millenary Pageant of 1948 was one of the first large-scale historical pageants staged after the Second World War.

Preparations were heavily affected by post-war austerity. Originally, the city council aimed to cast 2,000 performers, but this was reduced to 1,000. Costumes and props were difficult to make due to rationing. The city could not afford to pay a professional ‘Pageant Master’. Instead, they called on Cyril Swinson, a publisher and author who co-founded the Company of Ten, a St Albans amateur dramatics group. In this way, almost by accident, Swinson launched a new career as one of the most prolific post-war Pageant Masters. 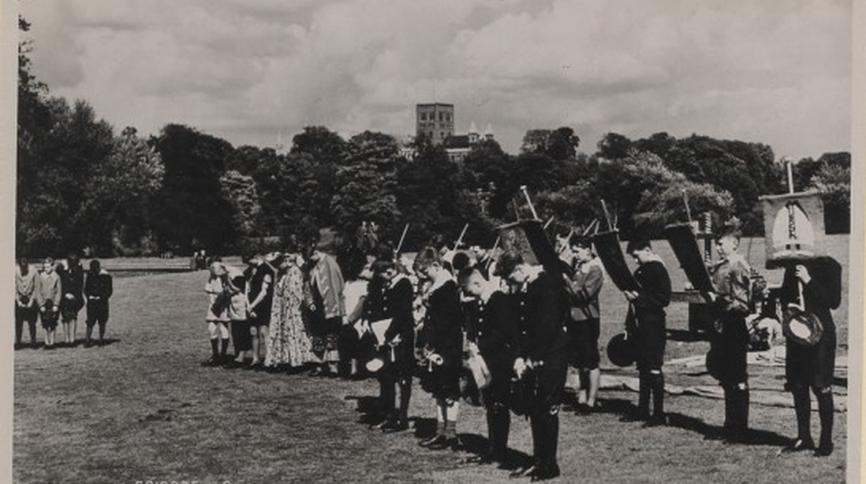 Along with many other places, St Albans staged a historical pageant to mark the Coronation of Queen Elizabeth II in 1953. Cyril Swinson was again Pageant Master, and this time was able to call on a cast of 1,600 to perform ten episodes featuring historical Queens and their associations with St Albans.

Just as in 1948, the 1953 pageant showcased St Albans – both to potential investors and residents, and to its own citizens. Local businesses advertised in the souvenir
publications, and the event looked to the future as well as the past. As the City Surveyor wrote in the 1953 programme, ‘the future St Albans will be a pleasant place … presenting a picture of an English city growing and changing through the centuries’.

You can download the full panel and label text of the exhibition here:

This exhibition is staged by: