Chaos Dancing Cosmos was a site-specific installation that used around 2 km of rubber and copper piping. The remarkable artwork pervaded the historic Assembly Room like a pulsating three-dimensional drawing. Small motors bestowed movement upon the static tubing – creating a human characteristic to an inanimate object. 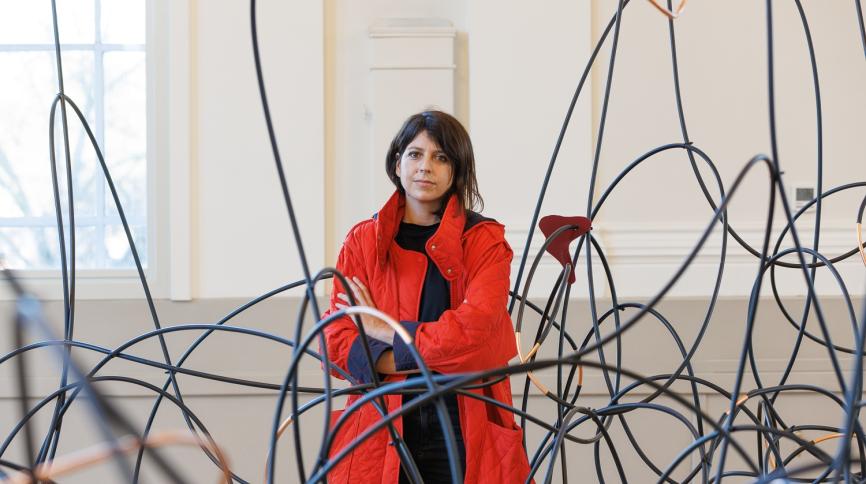 Rosana Antolí’s practice examines the role of social choreography and movement in relation to visual art. She works across drawing, sculpture, video and performance to interact with and observe our movements, creating patterns out of ordinary human actions. Chaos Dancing Cosmos was first exhibited in Barcelona, Spain in 2016 and has since toured to various and vastly differing locations across Europe. The installation is made site-specifically to each venue. Antolí has added new materials, such as copper, to the installation, to juxtapose with the black rubber and to respond to the Assembly Room’s elegant and historic features. She says:

"In the last few years, water has become a central feature in my work and so for this space I wanted to create the sense of a tide – introducing an ocean in continuous movement. For this new version of Chaos Dancing Cosmos, painted metal components are added to suggest the sound of water and the relationship between humans and this element. Inspired by the natural forms of conch shells, bones, ear canals and wave molecules, they also reference the empty spaces in my hands when trying to hold onto something they cannot grasp.

I invite you to imagine that these expanded lines are words; the words are movements; and all of them are being heard. All these movements and words are translated into lines that take over the space in a chaotic ‘entanglement’. In fact, the word ‘entanglement’ is key to understanding this installation because it captures interdependence, inseparability and connectedness between species.”

Rosana Antolí (born 1981) is a Spanish-born, London-based artist. She graduated with an MA in Performance (Department of Sculpture) from the Royal College of Art, London, in 2015. She has received numerous grants and awards, such as the Royal British Society of Sculptors Award (2015) and Gasworks’ International Fellowships (2015). Antolí has exhibited widely in the UK and internationally, including at the Lehmann + Silva Gallery, Portugal, Tate Modern, London, Centre Pompidou Malaga, Spain, and Joan Miró Foundation, Spain.

Rosana Antolí is represented by The RYDER Projects, Madrid.

In partnership with UH Arts